Why I trust Bill and Melinda Gates’ COVID-19 efforts 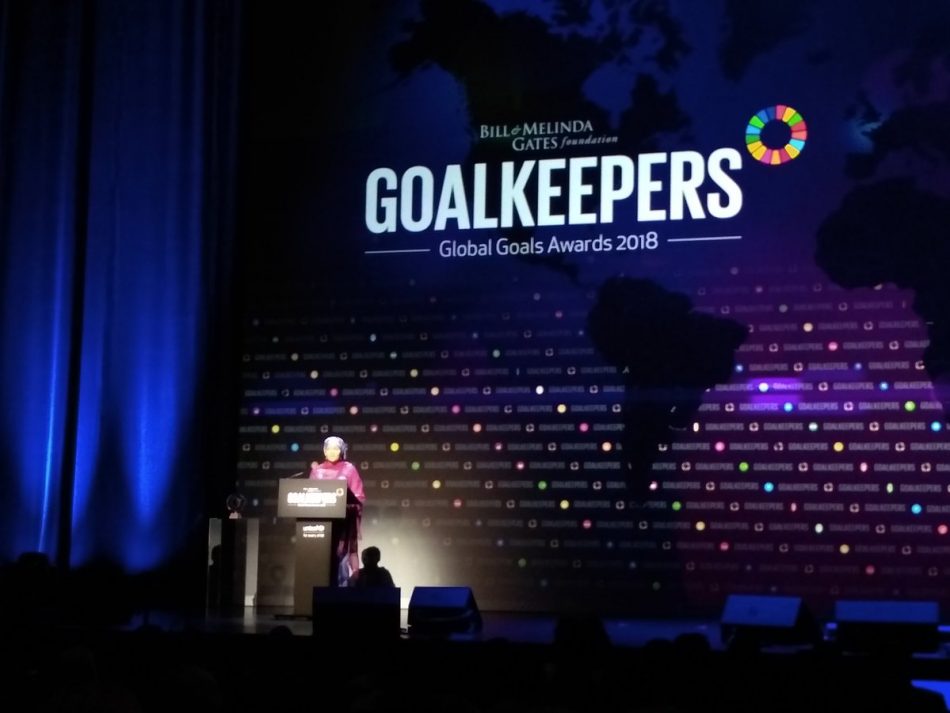 In Africa, we have a saying,”It takes a village to raise a child”. This statement speaks to the need for collective effort in achieving success at any endeavour.

Collective effort entails harnessing our talents and possessions in unison in order to magnify the impact of our initiatives. Currently the world is being tormented by Covid-19, a corona virus that has seen people across the globe infected. The pandemic has ravaged our lives more than anything in our lifetime. A tiny virus has seen governments instituting travel bans and lock-downs in order to contain the spread of this invisible enemy.

Understandably so, it is a time of fear and anxiety for a lot of people. This fear and anxiety if not handled well can lead to panic buying, loss of kindness and even disobedience to the protocols to curb the virus, thus, it is our prerogative as citizens of the world to be responsible in taking care of other.

It is the duty of every citizen of the world to be a conveyor of facts and desist from fake news from the grapevine. As long as a hypothesis cannot be tested it is difficult to distribute that information. In this time of crisis we need critical thinkers who are data-driven and seek to mantain the sanity of our people amidst the deluge of information on the internet.

I have seen a spike in fake news and conspiracy theories directed at Bill  and Melinda Gates around their efforts before and during this pandemic. They have been accussing him of trying to depopulate the world, inserting micro-chips that kill Africans in their Covid-19 test kits. The list of conspiracies has grown exponentially in the last two weeks.

One of the major reasons that the purveyors of the conspiracy theories and fake news are using is the seminal Ted Talk that Bill gave in 2015. In his talk, he warned humanity about the dangers of a pandemic and why we needed to be ready for such an event. Using data and epidermiological expertise he was able to simulate growth patterns and possible effects of a flu pandemic.

This data-informed modelling is what is now being used as a weapon by armchair analysts on social media.

Going through my Twitter feed I read some of the insults that were being hurled at Bill Gates and I became concerned, concerned is an under-statement, I became incensed. How can someone’s efforts be so unappreciated? Like other billionaires, Bill could have chosen to keep his money and enjoy life, but he chose to tackle the world’s hardest problems that our politicians and multi-lateral institutions like United Nations have not been able to solve.

In all Bill does, he uses data to make informed decisions and forecasts and that should be commended.

Setting goals is easy. The journey to the goals is where many fall by the wayside. I remember the world setting the Millenium Development Goals (MDGs) whose objective was to improve the livelihoods of all people in the world by the year 2015.

The Millenium Development Goals (MDGs) failed because the goals were fuzzy and no one tracked the world’s progress. When 2015 came, the world had no idea where it stood with regards to the attainment of the MDGs.

The MDGs mutated into Sustainable Development Goals (SDGs), these were more directed. The only problem was that not enough was done to measure and track the progress towards the attainment of the SDGs. What good are SDGs if there is no will to continuously track and review progress in every country?

Many countries dismally failed to attain the set targets thus MDGs were a monumental failure. They only served as a lesson on what humanity did wrong in implementation the audacious plan thus it paved way for a broader and more comprehensive framework called Sustainable Development Goals (SDGs).

Most people around the world believe that the SDGs have the potential to sustainably change the fortunes of earth and its inhabitants. As a species, we have evolved and improved our lives but we are not yet where we would want to be. There are still too many ills afflicting the common man and woman on the planet. The planet itself is bleeding due to our recklesslessness in pursuit of happiness.

In as much as the SDGs have been written in a concise but exhaustive manner and are poised to take humanity out of extreme poverty and hunger, these SDGs are useless if we do not keep a tab on our progress on a continual basis.

As long as we do not embed the values of the SDGs in all our endeavours we are doomed to fail. The SDGs have been adopted by ordinary citizens who in their small corners of the world are doing what they can to improve the chances of attaining success by 2030 and these efforts have to be shared and collated at district, provincial and national levels so that we have a clear view of what is being done, what is working and who is doing what.

The national reports should be shared with the rest of the world so that we can be able to put our progress into perspective in relation to our set goals and milestones.

As part of its follow-up and review mechanisms, the 2030 Agenda for Sustainable Development encourages member states to “conduct regular and inclusive reviews of progress at the national and sub-national levels, which are country-led and country-driven”. These national reviews are expected to serve as a basis for the regular reviews by the high-level political forum, meeting under the auspices of ECOSOC.

As stipulated in paragraph 84 of the 2030 Agenda, regular reviews by the HLPF are to be voluntary, state-led, undertaken by both developed and developing countries, and involve multiple stakeholders.The voluntary national reviews aim to facilitate the sharing of experiences, including successes, challenges and lessons learned, with a view to accelerating the implementation of the 2030 Agenda. The VNRs also seek to strengthen policies and institutions of governments and to mobilize multi-stakeholder support and partnerships for the implementation of the Sustainable Development Goals.

Should this be a voluntary exercise or all countries should be forced to report their progress if we are to achieve success?

Bill Gates, through the Gates Foundation dedicated time and effort to build systems for continuously tracking and measuring SDG progress.

In tracking the SDGs around health, education, human rights among other basic liberties as enshrined in the SDGs, Bill has been able to contribute in terms of funding, technical assistance and insights to charities and governments across the globe. This is servant leadership at work.

Bill managed to convene movers and shakers from across the globe who are doing amazing work in the health and education sectors through the Goalkeepers initiatives.

Last year, I attended the Goalkeepers event in Johannesburg, courtesy of The Bill & Melinda Gates Foundation and something stood out for me.

We were asked six questions with regards to the state of the world and most of us failed dismally. I got one out six. The most frustrating thing about this quiz was that these questions were so simple that a Grade 4 learner should have been able to answer them with ease.

Our responses, in line with our built-in pessimism, pointed out that the world was getting worse every day. It is not a coincidence that all the 200+ people in the room performed dismally but it is in tandem with the information we are bombarded with on a daily basis on the news, social media and other channels. If one is watching the news they would think that doomsday is nigh, negative news makes the headlines whilst positive news gets a mention in passing.

In as much as instinct plus news fed to us is negative, we have to take it upon ourselves to think critically and excavate the truth, the real truth, not alternative facts. The only instrument we can turn to is data.
Data can help us understand the state of the world and how it is changing using empirical evidence. We cannot let our raw human instincts of pessimism or even optimism mislead us into forming warped worldviews. Data can guide us to make informed decisions for the sake of our progress as a species.

We cannot leave our fate to chance when we have the capacity to measure progress. Technology has brought us to a point where we can confidently measure and analyze the data in a fast, economical and accurate manner.

With respect to human development, the Sustainable Development Goals (SDGs) give us a framework to align our activities so that it is measurable and can be effectively evaluated. For monitoring and evaluation of SDG-aligned activities, it is necessary to develop instruments for data collection, analysis and interpretation.

Fortunately, we don’t have to recreate the wheel because The Bill & Melinda Gates Foundation through their flagship initiative called Goalkeepers have already built an analytics engine which culminates into an annual Goalkeepers Report. We can all piggybank on this initiative to drive measurement of our own activities. You can read the report on https://www.gatesfoundation.org/goalkeepers/report

Like many other people all over the world, my fear and anxiety around Covid-19 is real, but I do not want this fear to take over my rationality. So I asked myself how I could contribute in a meaningful way, especially around people’s anxiety about the Bill’s intentions in Africa.

In my sojourn to help fight against fake news during this pandemic, I reached out to Mark Suzman, CEO of The Bill & Melinda Gates Foundation and expressed my dismay with the fake news and conspiracy theories.

I told him that as a Goalkeeper, I know the amazing work the foundtion is doing but I did not have enough ammunition to fight the online trolls who are hell-bent on spreading fear.

Mark, a very amicable person accommodated my concerns and referred me to Min Pease, who is in charge of the Goalkeepers Initiative at the foundation.

Min was very helpful and armed with many sources of information that I and others can use to steer the world to be more data-driven in its approach to healthcare especially during this pandemic.

Below is a list of articles that you can refer to:

Separately, you can sign up for the Optimist, where the Bill & Melind Gates Foundation regularly shares expert perspectives and updates on the response to COVID-19 (novel coronavirus):  https://www.gatesfoundation.org/theoptimist.